Look at this!  Two posts within a 6 month period!  I’d better pace myself…

Actually, I’d better pick up the pace of my runs if I want to eat these burgers again.  These are absolutely delicious, but health food they ain’t.  Of course, if you’re looking for something to reward yourself for a new PR or a race finish, these might be right up your ally.

First off, I’m actually going to go off topic and brag a little bit.  Check out the results of my weekend DIY:

I put in vertical dividers to give myself more storage above the fridge.  Although there was some trial and error (apparently it’s really hard to cut a straight line with a circular saw), it wasn’t too bad.  My inspiration came from here, and the author does a really good job of explaining the process.  I love it!  And it gave me the excuse to buy a few tools, although the fact that using my nail gun for the first time caused me to laugh maniacally is probably pretty strong evidence I should not be allowed to own one.

Anyway, I’m very proud of it, but really the only connection it has to the rest of the post is that it’s where I got the cutting board to chop the bacon.  As I’ve stated before, I love burgers, and this recipe is a doozy.  I made up the proportions, but the idea came from watching an episode of “Diners, Drive-Ins and Dives”.  It’s essentially a burger pan fired in bacon grease, how can you lose?

As you can see, it’s not too complex a list.  I think the meat should do the talking, and in this case it’s a lovely duet of beef and bacon.  To start off with, add the first four ingredients in a bowl: 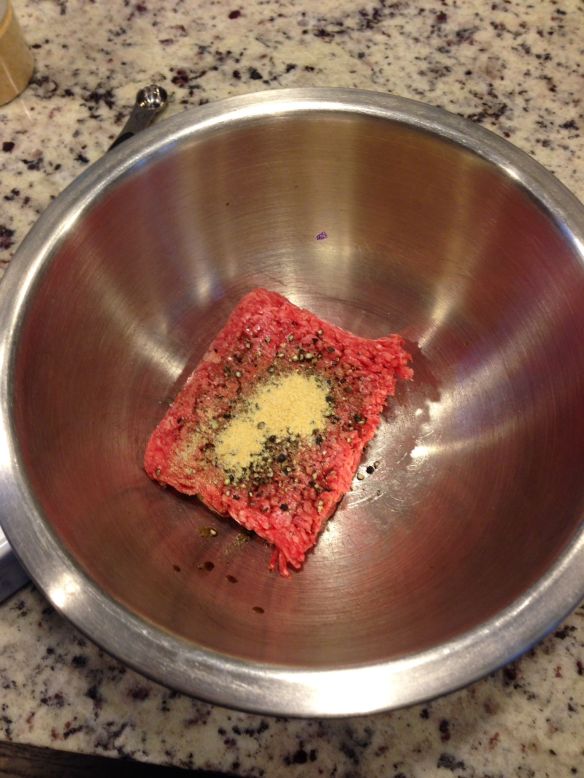 Season with 1/4 to 1/2 tsp of salt, but don’t over do it, we’ll be adding some more later.  Break up the beef and thoroughly but gently mix the ingredients.  I like using a disposable glove at this stage, as not only does it help avoid having to constantly wash my hands as I move from one task to another, but since my hands tend to be pretty warm, it helps keep the fat in the mixture from melting and sticking to my hands.

Cut the bacon into a medium dice.  It helps if you put it in the freezer for a brief time to firm it up:

Now comes the one piece of semi-specialized equipment: a ring mold/biscuit cutter (about 3″).  Now, if you don’t have one, don’t fret; you can use something like a tuna can with both ends cut off.  Just watch out for the sharp edges.  Also, buy biscuit cutters.  I like these a lot.  They sat on my wish list for about 2 1/2 years.  Boy I wish I had gotten them sooner.  Anyway, put your ring down on some parchment or wax paper, and press half of the chopped bacon into the mold: 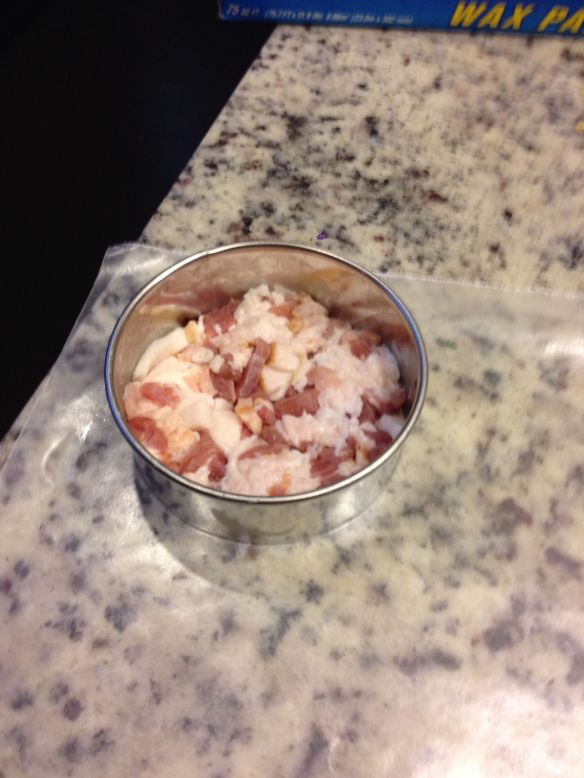 Now take half of the beef mixture and gently press it on top:

It’s a fine line how hard you need to push.  You don’t want a super dense burger puck, but you don’t want it to fall apart either.  Try pushing with your finger flat and held together rather than poking at it.  Then, gently remove the mold (it may help to slowly turn the mold as you do so).  You’ll hopefully end up with something like this: 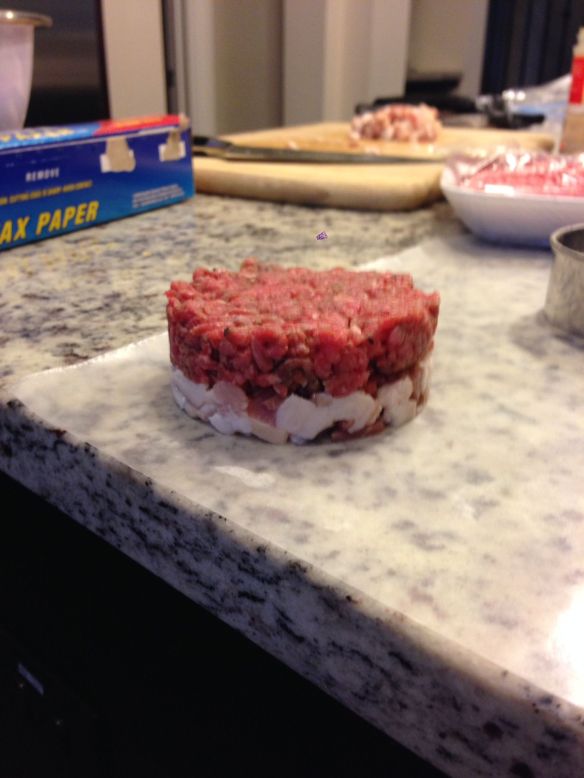 Beautiful, isn’t it?  Just stand and admire it in all its carnivorous glory.  Now snap out of it and make another one.  When that’s done, cover the meat and put it back in the fridge for at least 30 minutes.  An hour or two would be better.  It’ll help the flavors develop and keep the burger together when cooking.

As for cooking, this get messy, so I’d recommend doing this outside with a cast iron skillet on the grill (you need something to hold the grease).  Don’t forget to put the skillet on when you start the grill to avoid thermal shock issues.  I did 2 out of 3 burners on high for my grill.

Take the burgers out about 15-20 minutes before you slap them on the grill.  Sprinkle some more salt and pepper on the beef.  Now, the burgers are still pretty delicate, so I like to invert them so the bacon side is up, and the beef is on the paper: 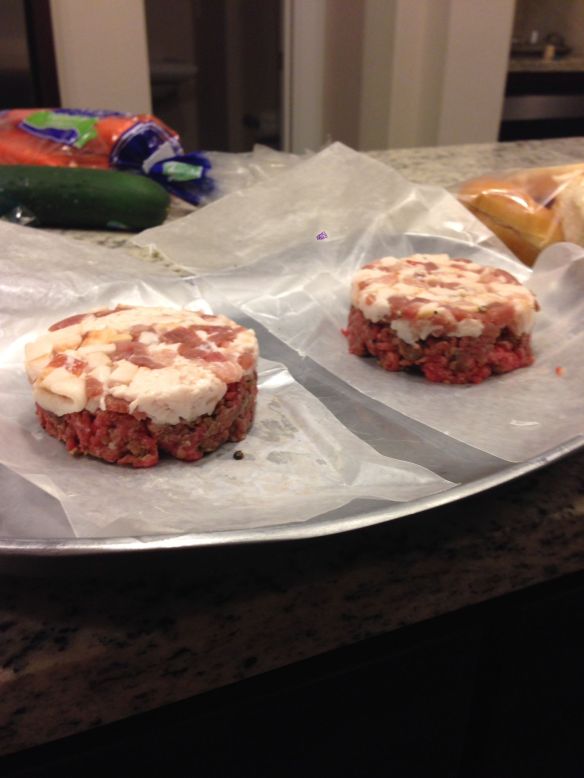 This way, I can slap the bacon down on the skillet.  Is your skillet nice and ripping hot?  Let’s get cooking!  As just stated, take the burgers and put them bacon side down in the skillet.

Close the lid and let them cook for about 4 minutes.  Then flip them.  Be careful at this stage.  There’s a LOT of spitting bacon grease, and some bacon may be sticking to the pan.  Use a metal spatula and make sure you get separation from the skillet before you flip.  If the grease has not spread evenly, aim for a nice wet spot to cook the beef side (I did say it wasn’t health food!). 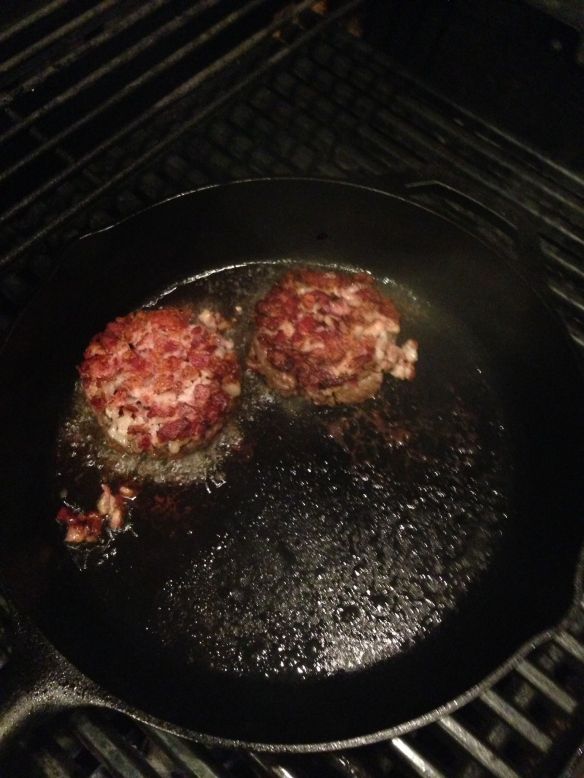 Cook for another 4 minutes on high.  If you want to add cheese (and who doesn’t?) do it about 2 minutes after flipping.  This is also a good time to put your bun cut side down on the upper rack or over the unlit portion of the grill to toast.

Then simply remove from the skillet and place on a bun with your favorite condiments (this would go really nicely with some caramelized onions and garlic).

And a quick note on cleaning the skillet: while the grease is still hot (but not spitting), thrown some kosher salt (maybe around 1/4 cup) in the pan and sweep it around.  It will help soak up the grease and help clean the skillet as well.

1 thought on “Bacon Burgers – The Next Level”